1. National
1) Defectors from N.Korea return to their country
The North Korean news agency announced that Kim Kwang-hyok, 27, who defected to South Korea in 2008 via China has returned to North Korea along with his wife, also a North Korean defector whom he met in South Korea. Showing the couple in a press interview, the news agency reported that the couple was lured to the South “by dint of gimmicks, appeasement and manipulation of brokers and agents of the South Korean intelligence agency” and “suffered a miserable life in S.Korea.” It was the 2nd time North Korea reported on the returning defectors in the media this year. 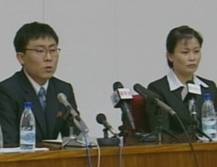 2) More Koreans have diabetes
According to a report from the Korean Diabetes Association, one in 10 adults over 30 was diabetic in 2010. The rate rose to 22.7% for people over 65. If to include those suffering from pre-diabetes symptoms like abnormal glucose levels, nearly half (47.4%) of all senior people are either diabetic or close to it.  The rate of diabetes among Koreans was 8.6% in 2001, and rose to 9.1% in 2005.  KDA said the rising number of senior citizens, surge in obesity, lack of exercise, consumption of fatty foods and stress are the main reasons behind the increase.

I respect my wife for spending two hours every day at a fitness center as I feel 5 minutes on a treadmill is worse than 5 hours of watching a cricket game. My respect for her evaporates quickly, however, each time she pushes the button for an elevator at my apartment where we live on the third floor.

2. Economy
1) Hyundai Heavy Industries to build a diesel engine plant with Cummins of U.S.A.
Hyundai Heavy Industries broke ground to build a new diesel engine plant in a joint venture with Cummins Engine in Daegu, 300km southeast of Seoul. The plant will produce 50,000 engines a year once it is completed in 2014 with $80M investment. HHI said the JV will secure a steady supply of engines for construction equipment as it is expanding its business in this field. HHI’s construction equipment division has sales of $3.7billion last year, up 29% from 2010. HHI expects the new plant will generate 5,000 new jobs and $1.8 billion in economic effect.

HHI is the world’s largest shipbuilder with 53.7 trillion won ($48.8B) in sales in 2011.With slowdown in European economy, HHI just began offering “honorary retirement” package to cut labor cost, the first time to do so in its 40 year history. What is irony is that HHI had spent billions of won in T.V commercials until just a few months ago to boast their contribution to the society by saying “Do you know a company whose average employee service period is 19.1 years?”  Well, “Do you know a company which plans to cut average employee service period by 30% in less than 3 months?”

3. Auto Industry
1) Hyundai opens its Brazil plant.
Hyundai Chairman Chung Mongkoo was in Piracicaba, 160km northwest of Sao Paulo, for the grand opening of its first automobile plant in South America. Built on a 1.4 million area with investment of $700, the plant can roll out 150,000 units a year. The HB20 subcompact car that runs of gasoline and bio-ethanol is the plant’s first model. With the 35% duty exemption for those from the new Brazil plant, Hyundai expects to boost its sales in Brazil significantly from 85K a year to capture 10% of the Brazil market. The Brazil plant is Hyundai’s 7th overseas plant after India, Turkey, Beijing, Alabama, Czech Republic, and Russia, not counting Kia’s three other overseas plants.

I can testify the grand opening of the Brazil plant was the work of nearly 14 year preparation. When I put my resignation in Hyundai, my boss thought I was still a value for the company and put me in Brazil project task force team on April 30, 1999. I left the company on May 10, though. There had been ups and downs with the Brazil project ever since, and Hyundai finally broke ground in Oct, 2010 as Hyundai thought its goal of world’s No.4 maker would not be possible without a plant in Brazil that has become world’s 7th automotive manufacturing country. It wasn’t that Hyundai wanted to reinforce its soccer team by hiring a bunch of Pele’s proteges.

2) GM Korea’s Gunsan plant in dispute
The union in GM Korea is protesting at the company’s recent decision not to produce new 2014 MY Cruze in its Gunsan plant, 300km south of Seoul. Employing 3,300 employees, the Gunsan plant currently manufactures 260K passenger cars a year, and 160K of them are Cruze. GM Korea President Sergio Rocha said there will be no reverse of the decision, and the decision was made after GM’s strategy over manufacturing cost, profit and sales opportunities. The union threatened that “GM will receive huge protest from the workers unless it revokes its decision.” The union also said they can even wage strikes.

The union is getting emotional instead of logical, just like what they have been doing so many years under Daewoo Motor days. This is GM, a typical American company, and it is those in Detroit who are making global strategic decisions. The union can strike, make protest visits to GM in Detroit, petition to Korean politicians or have PSY sing “Gunsan Style” at Today Show, but all their efforts still would not be productive unless they can better explain to Mr.Rocha and GM CEO Dan Akerson why Cruze production in Gunsan means more money to GM than anywhere else. Just an opinion of someone who has worked for an American company for 14 years after Brazil project.

1. National
1) Kim Jong-un’s brother in South Korea?
Rumors are floating that Kim Jong-nam, 41, the first son of late Kim Jong-il and half brother of current N.K. leader Kim Jong-un, has recently sought asylum in South Korea while residing in a third country and that South Korean authorities have safely secured him. South Korean government played down the rumors, but a lawmaker from the ruling party said that an official from National Intelligence Service said “It is difficult to comment on that” when the lawmaker asked the spy agency if they knew anything about Kim Jong-nam’s whereabouts. Just by coincidence, Kim Jong-nam’s eldest son living in Europe described his uncle Kim Jong-un as a dictator on a recent Finnish television talk show. 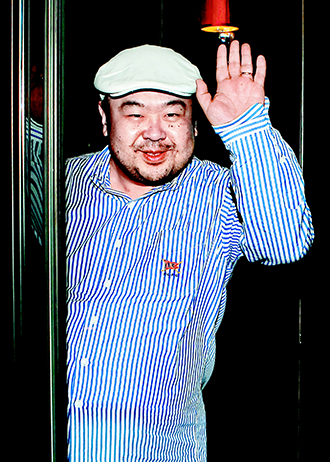 As the eldest, Kim Jong-nam was expected to take power from his father, but that dream went away when Kim Jong-nam was caught by Japanese immigration in 2001 when he tried to enter Japan under false passport to visit Disney Land in Tokyo. Kim Jong-il probably thought running a nation isn’t a Mickey Mouse game.

2) Google got caught between Korea and Japan?
While its CEO Eric Schmidt tried to be friendly with Koreans, even learning “Gangnam Style” horse dancing from Psy last month, Google has angered many Koreans by deleting the Korean address for the Dokdo islets (Takeshima by Japanese) from its map service, under pressure from Japan. Google has refused to reconsider the change despite the protest from Korean government. Google claims it is trying to be neutral, but Koreans think it not neutral at all to delete Korean address for Dokdo and to identify it by the old nautical name “Liancourt Rocks” as the islets are officially administered by Korea.

It seems the feared aftershock of President Lee Myunghbak’s surprise visit to Dokdo in August is taking place. Dokdo became well known to other nations after his visit, and many might think Dokdo is in dispute, much like Kashmir. Lee’s next move is to hold a press conference to tell everyone in the world in 110db that his Rolex watch for wedding in 1970 belongs to him, not to someone else.

2. Economy
1) Apple gets slammed by U.K. court, again.
A U.K. court ordered Apple to repost a message on its website saying “Samsung did not copy its patented designs.”  The court said the Apple included “incorrect” and “untrue” information in a message that was to acknowledge the original court ruling that Samsung’s Galaxy Tab did not infringe on the design of the iPad.  On Oct. 25, Apple did post a message on its U.K. homepage acknowledging the court ruling, but quoted a judge who said the Galaxy Tab’s design was “not cool enough” to be mistaken for an iPad. 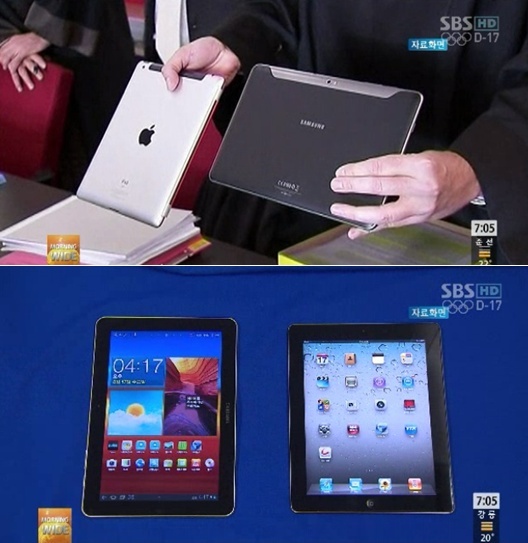 Samsung’s relationship with Apple is quite weird. Samsung sells 8 billion dollars worth smart phone components like semi conductors and LCD screens to Apple each year, but its Galaxy models have to compete against iPhone or iPad made of its own components. Samsung sales division’s worst enemy is itself.

3. Auto Industry
1) Hyundai to develop 3.0L Turbo engine.
Hyundai announced its plan to develop a 3.0L Lambda turbo gasoline engine at its 12th annual International Powertrain. Hyundai said it plans to use the turbo engine for Grandeur (Azera) and Genesis for better fuel efficiency and horse power by 10%. Kim Haejin, the newly appointed head of Powertrain R&D, said “Demand for eco-friendly, high ?efficiency engines and transmissions is rising so we plan to speed up development of cutting-edge powertrain technologies.” Hyundai currently has turbo version for 1.0L Kappa, 1.4L Gamma, and 2.0L Theta. 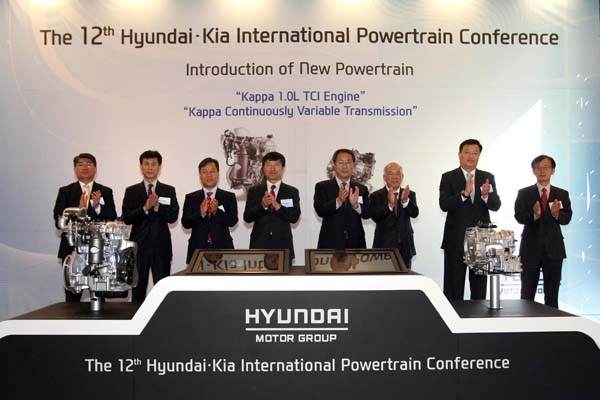 Hyundai seems to be determined to make turbo as its key strategy as WIA, Hyundai’s sister company, has just decided to get into turbo charger business. WIA’s entry can turn turbo charger market currently crowded with BorgWarner, Honeywell and Mitsubishi, into an arena for UFC fighters.

2) Hyundai’s sales in China spikes
Beijing Hyundai set new sales record in September, thanks to unexpected gains from the recent Senkaku/Diayou island dispute between China and Japan that sparked boycotts against Japanese products. Hyundai sold 84,188 units in China in September. With the 43,639 units its sister Kia sold in China, the total sales for both reached record 127,827 units, up 9.5% from the previous peak of 116,763pcs in the same month in last year. Toyota China saw its Sep sales drop 48.9% on year to 44,100 and Honda China also suffered 40.5% decline on year to 33,931 in Sep. Ranking 3rd in sales last year with combined sales of 1.17 million units, trailing VW with 2.19 million and GM with 1.2 million, Hyundai-Kia sold 930K units as of September this year.

While it was all good news from China, it was not so from North America because of Hyundai-Kia problem with U.S. EPA over fuel consumption rating. Though the discrepancy was due to the misunderstanding of test conditions, according to Hyundai, Hyundai-Kia management made a full apology and will reimburse average $88 for 900,000 consumers who bought Hyundai-Kia models in question. A 0.0009% owner of Hyundai stocks, my wife thought Hyundai was making a right move by being proactive, and decided to hold her stocks.